In the past month the Chevrolet Volt has been attacked by the press for battery fires that can occur some length of time after a side impact and, by the Republicans, for being an ‘Obamamobile’. And then GM has to stop production because of lagging sales. 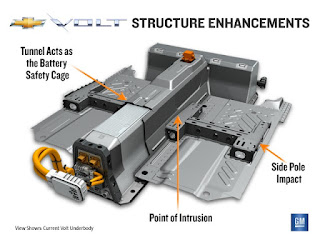 Why is the American press so negative about American products? Are Imports really that much better?

Almost fifty years ago, Ralph Nader was ultimately responsible for killing GM’s Corvair while championing the movement toward safer cars. Turns out that ten years later the Corvair’s alleged poor handling was shown not to exist and that the car was actually very safe. But it was too late for the Corvair, and ultimately the 1960's American small car movement.


The turmoil surrounding the Corvair allowed VW to make immense headway into the North American market over the next few years bringing with it the concepts of economy and quality. The VW Beetle also let the press compare the U.S. product against it which further ‘proved’ that American products were inferior to imports.

When the Japanese vehicles reached North American shores in the late 60's / early 70's the consumer mind set was positive toward them because they were economical and had good quality compared to American products. At the time, they were great - no rattles, good paint, etc. - because of their construction methods and because there were few models, no options other than colour, choice of transmission and radio. No power this or that. Turns out that the Japanese cars were biodegradable and, for the most part, not suited well to long distance driving. They were, however, cheap and easy to repair by almost anyone. People didn’t care because they were told that these cars were better than their American counterpart.

So, to get into the mix, GM created the Vega and Ford the Pinto. The Vega had potential, but its engine was too ‘out there’ with its fancy Silicone/Aluminum block that was not repairable. The Pinto also sold well until a couple caught fire in rear end crashes. Then the bottom dropped out of that market too.

The novelist Tom Clancey turned the scenario around in his book “Debt of Honor” with the import catching fire and the media railing against it. The rest of the story demonstrates the ultimate power of the press’s ability to influence public opinion.

So, back to the Chevrolet Volt.

Is the battery unsafe? Maybe. But a fuel system can be compromised in a crash and lead to an issue later while in storage.

Is it an ‘Obamamobile? Only because he used it as an example of American resilience after the market meltdown a couple of years back while visiting a GM assembly plant. Yet it’s become a political football because of tax funded rebates to ‘green car’ purchasers. Never mind that other hybrids qualify for some form of rebate or concession.

Can the Volt come back? The Corvair, Vega and Pinto didn’t. Neither did American cars with diesels.

Maybe the Volt can buck the trend. Audi did after its ‘phantom acceleration in Park’ twenty years ago. Toyota did after its recent ‘floor mat on the gas pedal but it has to be the car’ issue.

But don’t bet on it. An American car never has. I doubt the press would allow it. It would mean that they were wrong.